Heck yes! I’m pretty dang pumped about this post. Ever since the middle of high school, I’ve been immensely interested in “the process.”  You know, that middle bit between point A and point B that nobody but the artist ever sees. I’ve always loved peeking behind the scenes to see where something started and what kind of work and thought went into creating the finished product. I know I’m not the only one because a lot of you have asked to see before/after’s of certain shots on my Facebook so I decided to create a new series that not only shows you the before/after’s (hover over the image to see the before), but that uses each image to explain a bit more about what I do in post. Hope you all enjoy the first three! 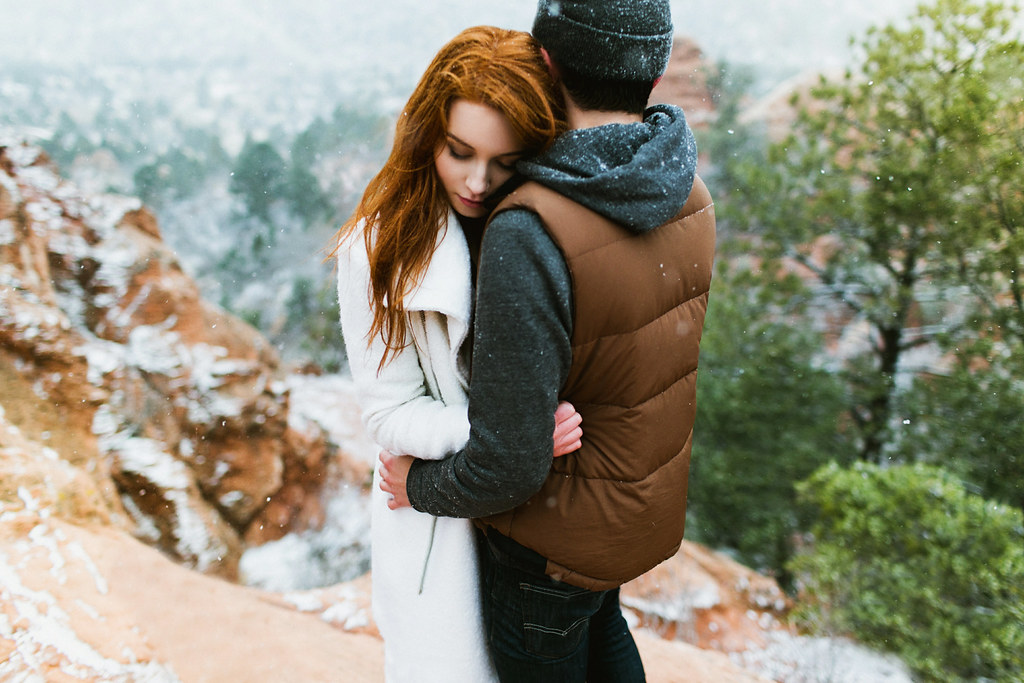 Here it is! Photo numero uno. This shot of Madison and Joe is one of my absolute favorites from the day. We got caught in a snowstorm at Garden of the Gods in Colorado and it brought out the best of everything. The snow brought in motion and mood that I loved, the fog gave me gorgeous soft light, and the cold created a perfect environment for them to wrap up tight. Not too shabby for something that most people would complain about. Honestly, I’ve been praying for foul weather a lot more often than I used to. Something about it creates that extra little bit of magic that pushes an image from interesting to intriguing.

As soon as you hover over this first image one thing will be pretty clear, my images look FLAT out of camera. My style comes alive in post. Obviously the ingredients have to be there (good light, a great connection, correct exposure, interesting composition, etc) but my editing is what cooks it into my style. If you know my work, you know that I love shooting in soft light (either shade or back lit) which means that my RAW files are pretty soft. In post I bring back the contrast and richness that gives the image the pop that I love. Another thing you probably noticed in the hover over is the little things that were taken out of the image (the phone in his pocket, the tree branch, some snow on the ground, etc). Don’t worry, we’ll talk about that in the last frame. Pinky swear. 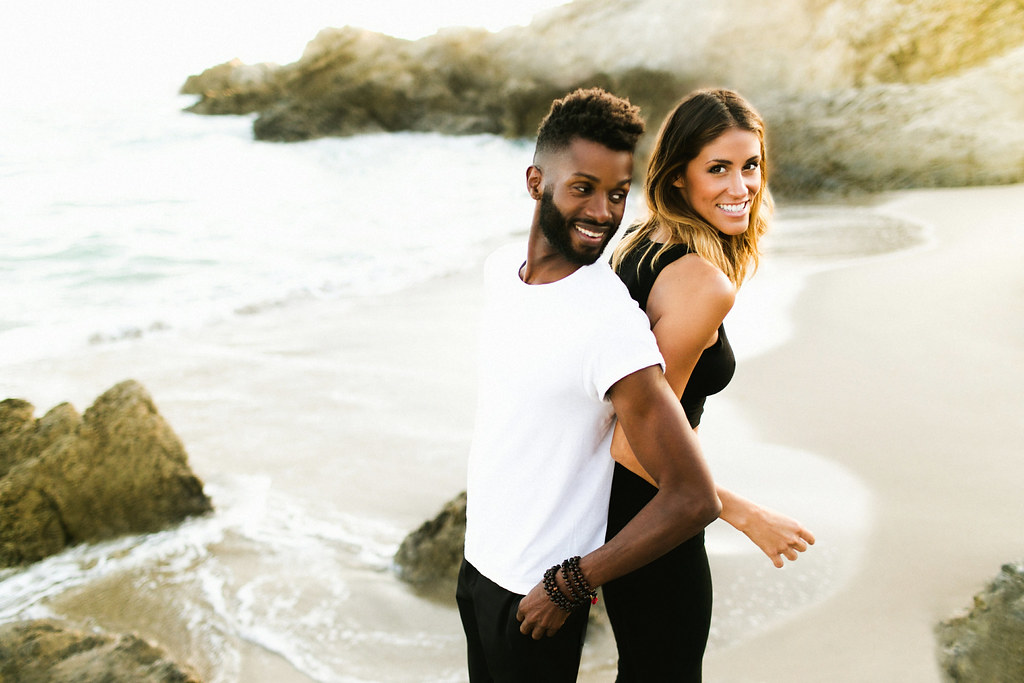 I haven’t shared this shoot yet but… hot damn. I’ve known Preston for a while now and it was so rad to finally meet is fiancee! They both just radiate awesome. Knowing Preston, I knew that this would be a pretty energetic set when I was driving out to the location and I’m so excited about what we created. It’s on the way soon!

Now back to the before/after! Since I always shoot in shade or with back lighting, my WB right out of camera either lands in the the really cool range (in the shade), or the really warm range (backlit). I shoot on AWB because I’m not a fan of fidgeting with dials while I’m shooting and I know that, since I shoot RAW, I can always change the WB as much as I want in post without losing any quality. This frame was shot in the early evening in the shade of the coastal cliffs which left me with pretty cool tones right out of the camera. When you hover over it, you will see how much I brought back the warmth in post. The golden light that I love sometimes just doesn’t show up to set as much as I want it to but I have a few tricks to bring it back. Aside from altering the WB in post, I also add warmth into the shadows which warms up the image without making the skin look off-color. If you hover over the frame one more time you’ll see that I also added a bit of warmth with a LR brush coming in from the top right corner and over the top of the cliffs to emphasize the golden haze that the sun was giving off. Long story short, if the golden light isn’t there, create it. 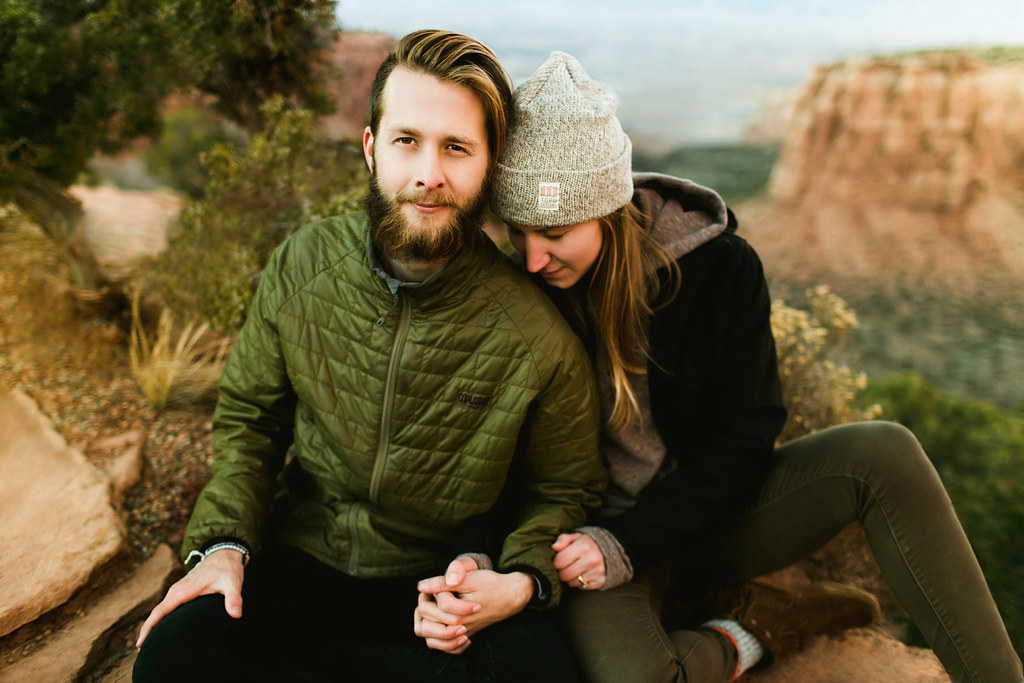 During my last trip out to Colorado with Katch we camped with and shot these two at Colorado National Monument. Nothing but long drives with open windows and mountain views. Nature rocks.

I’m a complete sucker for minimalism. The less distractions the better. I do a decent amount of cleaning things up in post because my mindset is “if something doesn’t add to an image, it takes away.” Does this mean that I spent a ton of time taking out tiny black pebbles on the ground? You know it. Good things take time. Chances are none of my clients know that I spent the time to clean up the background as much as I do, but they do know that my entire portfolio looks clean and simple. That’s what matters. Without distractions to draw your eyes in different directions, you look deeper into the moment that actually matters. For this before and after, I kept the editing the same but showed you what I change when I retouch. The background becomes a series of clean shapes instead of distractions that try to push their way into the foreground. An easy way to see which distractions should be taken out is to look at your image and squint your eyes until it becomes blurry. You’ll be able to see the light and dark shapes that pop out much easier and you’ll look like a fool in the process. Win win!